In 2013, I "raced" Galveston after barely surviving Qt2 Pro Camp, and months of underlying fatigue that just wouldn't go away. Only now that I'm healthy do I realize how grey that cloud was that loomed over me. There was almost complete apathy toward being there and taking one more step- I felt bloated and stone legged, annoyed, and just wanting to move on from the world of swim, bike, and run. The back pain lasted for days after, and it wasn't long before I called my coach at the time, Jesse, and said I'm done racing.

In the last 2 years I've discovered that the general health issues had to do with my body's ability to process folic acid, and its need for bio active folate...which I talked about at length in another post. I also did find balance in my life, and got a life ;) haha. As well, maybe it was just giving time, time, but I learned to manage my back pain and spent many of what felt like stupid minutes a day doing tiny exercises/stretches that have accumulated to nothing short of a miracle.

I don't for once take my health for granted, so I know that the back pain is a part of me as an athlete and the spondy as a condition is a part of me as a person in whatever activity or lack thereof I partake in.  So I can only continue the diligence when it comes to this bodily maintenance.

I arrived in Texas on Wednesday night, got a great night's sleep, and was eagerly at the pool at 6am on Thursday. Everything was going perfect until 11am when a sudden urge to puke my brains out hit and didn't stop until 5pm that I was letting out vile and coiling in screams at the stomach pain. Realizing I couldn't even keep down 2oz of water, and my mom said I looked like death, we headed to Urgent Care. I passed out in the car over. Two IV bags and a triple dose of anti nausea medicine later, and life looked promising again. 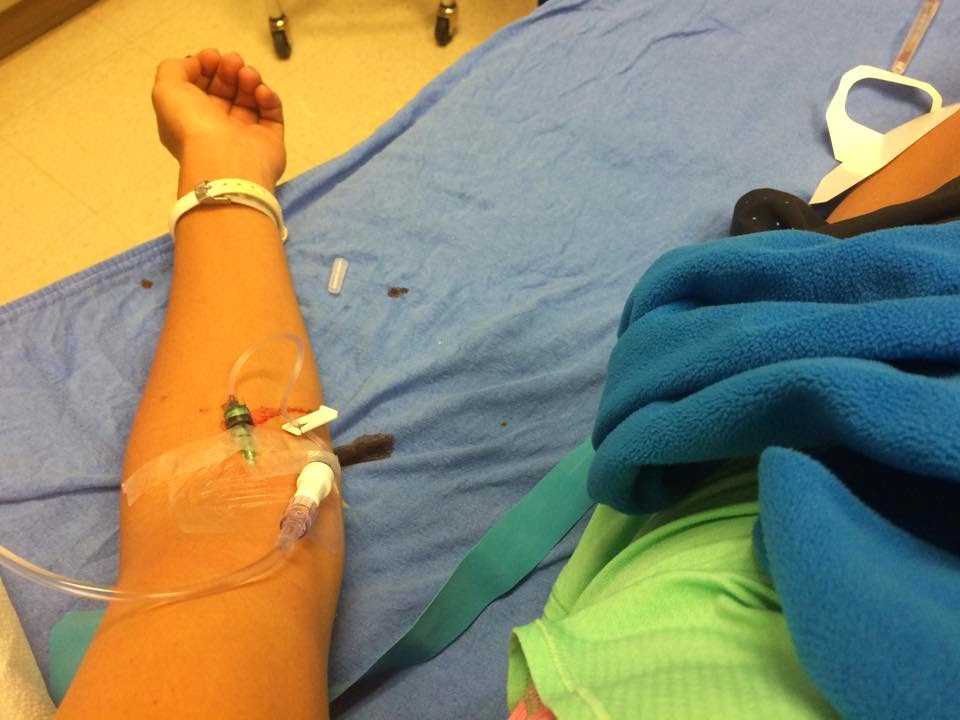 The doctor said it was a virus, so not food poisoning, and that if I wanted to race I just had to get as much fluid and hopefully solid food in by Sunday morning (race day).

Saturday evening in Galveston was my first real meal aside from boiled potatoes, fruit cups, and bananas. I even felt good enough to have a glass of white wine.

The mistake was made on Sunday morning when I should've been preemptive and downed some electrolyte tabs, or drank a bottle of sports drink with Base salt.

The race----
Swim: I lined up front center, and ended up swimming 99% of the course on Alicia's feet ahead of the whole group, minus one girl that was farther ahead of us. It felt cruisey and the only bummer was having to navigate hundreds of slower age group men from prior waves. I did cramp 3 times on my right calf in the swim and still didn't take the hint to load up on extra salt on the bike!

I lost Alicia through a crowd of those men right before the last turn bouey toward the ramp.

Onto the bike I felt awesome. The Dimond is just ridiculous, that's all I need to say. I opted for a disc in the most perfect flat conditions. I passed Alicia a few miles into it, and then she caught back up with about 10miles to go. 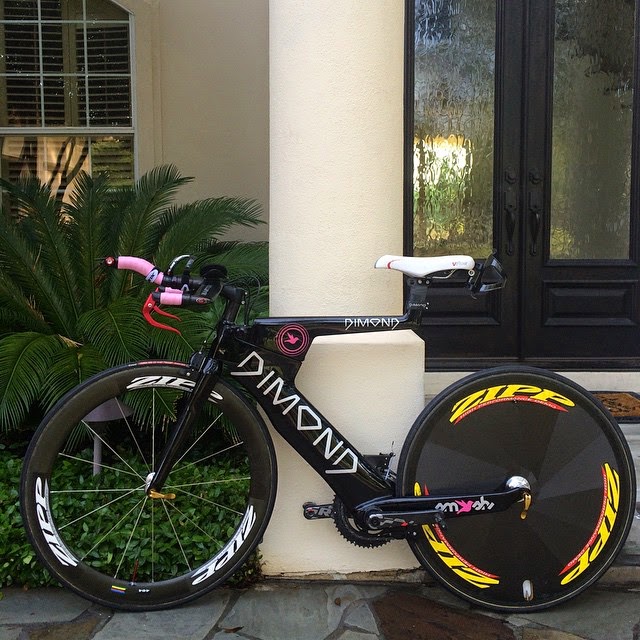 I ended up coming into T1 only about a min ahead. I knew she ran well since she trains with my friend Sam Mazer, and so I just hoped I could run strong and even if she did end up ahead by a couple minutes she had her Worlds slot so I'd be good and have had a breakthrough race.

Then it happened. Roughly 2 miles in, the quads started to cramp. I stared grabbing bananas, gatorade, and coke at every aid station like I was at an eating contest vs a triathlon. Too late. It was very humid, but I train in heat and I do well in humidity, and have never ever cramped in a race- EVER.

By the middle of the first lap I was about to hand my chip in and call it a day. The pain was ridiculous. Every step felt like my legs were going to buckle and I was jogging at a frustrating pace. It sucks when you feel great but your legs are worthless! 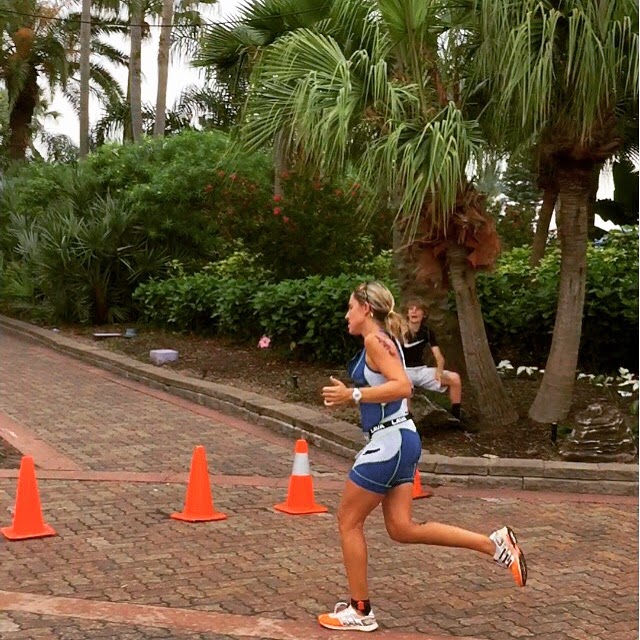 At the middle of the second loop I actually laid down for about 10min and had a massage on my legs to try and get the cramps out enough to just finish.

Devastatingly enough, I got passed with about 3/4mi to go by the girl that got second, and thankfully managed to hang on and finish because the slot rolled down to me for Austria.

Some things are just out of your control, but I do feel a bit of anger at myself for not having the light bulb go off and load up to prevent the cramps. It was such an obvious possibility that I dropped the ball. But, you learn.

That said, I am thrilled that I PR'd the bike with a 2:22 and had almost ZERO back discomfort. Knowing that with even a decent run I might've PR'd for a 70.3, motivates me like heck to put my head down and drill the training for Austria and Chicago.

You never know what will happen on race day but I'm in it to win it so after a couple weeks break, I'll be back to work;)!!

One month to go!!! Racing for the Children's Tumor Foundation

I am Incredibly grateful to my friends that have already donated to this great cause which I hope to race not just the Hawaii 70.3 for, but many more events!!

It will be an honor to line up on that start line knowing that the journey was more than time spent in a pool, a trail, or cycling highways. It was about being thankful each and every day for health and the OPPORTUNITY to be able to do each of those things. Children born with neurofibromatosis battle obstacles much greater than most of us could ever imagine.

From all the reading I've done regarding neurofibromatosis, it is wonderful to be able to play a part, however small, in funding the research and education/counseling for families affected by this genetic disorder- especially with my recent involvement with all the kids in Cabo, and our own TriCaboKidz foundation. 30 days left for us to reach the goal together!! Thank you!!