This trip to Vineman was an absolute ball. I drove up with my friend Eugene, and we arrived in wine country at around 1pm Friday. After check in and unpacking, we went for a swim in the Russian River with Beth & James. It was nice out but definitely cooler than the years prior. As much as I can't stand wetsuits, any fresh water swim makes me smile :)

That night we had an amazing dinner also with B&J at Willie's Raw Bar in Healdsburg- the cutest little town ever!- insane fish tacos, dunganese crab, and seared ahi that melted in your mouth like butter...heaven! I even had a glass of red.

The following day was sloooow...we lounged around in our hotel room until 10am hehe and then went to pick up our packets and eat lunch at KC Downtown Grill right in Windsor, blocks from the High School. I had a really good grilled salmon salad.

The pre race laziness continued as we went to the theatre to watch Horrible Bosses and then made our way back to Healdsburg to eat one of the most memorable meals I've had in my life at Gratitude Cafe. It's a vegan/raw/organic place and we ate POUNDS of food but amazingly felt light and energized after the meal. I am a raw food fan! The cafe also had a cool hippie bookstore and artifacts section and overall Buddhist feel with happy/grateful zen like titles for the dishes on menu. 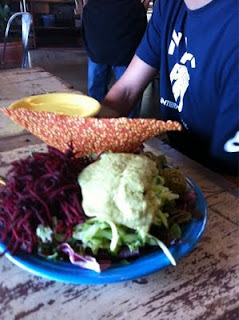 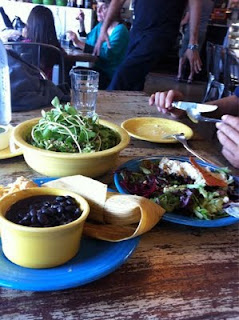 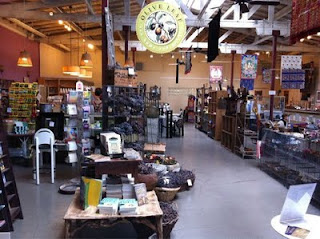 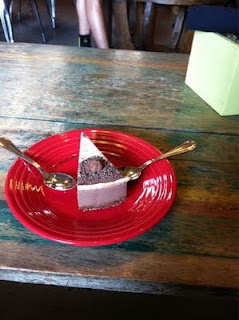 Early to bed and RACE TIME.

Now I'll briefly go over swim bike run and then go into the core of this post which is to explain what this race means to me and how I will go forward from it.

Swim- lined up front right and had eyed the good swimmers from their warm up- you can spot a good stroke from here to China. At the first 25m I was ahead with another girl and then surely 4 or 5 more girls were with us. I was bummed they weren't hugging the edge as it negates the head-on current and instead swam right in the middle along the boueys. But oh well, you go were the draft is! In the blink of an eye the small bunch gapped my and another girl which I should've made sure never happened as the whole rest of the swim they were within sight but not quite reachable especially when we began swimming over other wave's slower swimmers. Regardless I knew the girl whose feet I was on was a good swimmer and passing her would yield the same time with a higher effort. So I was swimming super super comfortable and knew we'd be under 30. Came out in 28 and change- might've been 27low/mid with the other girls but I was content. 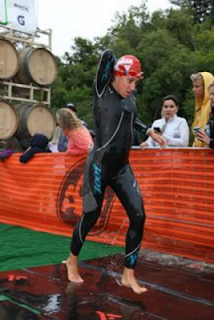 On to the bike.

The plan was ride hard. That's it. Just go at Olympic effort and get to T2 so I could get my run on. I had this f'ing annoying piece of dirt or maybe an eyelash in my left eye that was very irritating and didn't go away until about 15mi in! OMGosh I was praying I wouldn't have to deal with this the whole way what a nuisance. Cool thing was it took my focus off everything else so before I knew it I was close to 1/3 of the way into the bike. It rained on us a bit, the weather was cool, which had me bummin but whatever it's race day just keep on goin'! 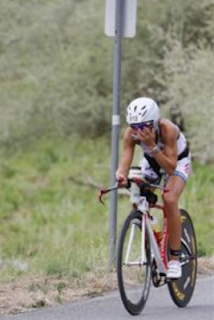 Notice thing in my eye! haha

I got into T2 and felt good, but was sooo ready to be off my bike my hip flexors and low back were screamin...something I have to address on my set up this week.

Run- signature pee stop in T2 and I was out. I knew just holding it together mentally and staying just below 7's on the net up hill on the first half would pay off on the way home. So I saved a bit until mile 7 and then ran hard home. 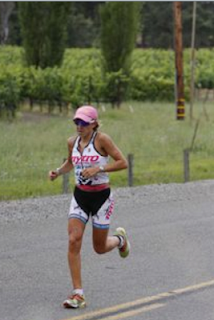 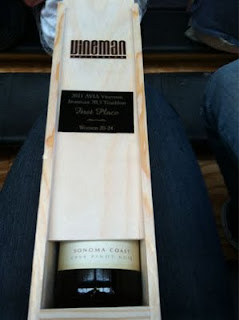 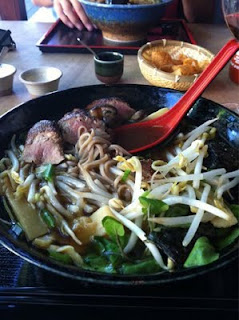 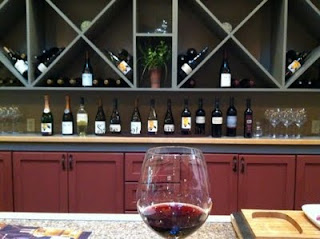 For the first time since I can remember I felt amazing in all three mentally, and more importantly on the run I was elated to be running and even though I was running hard it wasn't suffering in any sense of the word. It was a good hard effort and reflected the way I've felt in and approached my training the last few months- confidence and skilled form.

So was this a breakthrough for me? Am I over the moon with joy and pride? NO, and No. It was a "it's about f'ing time" race, and while I am happy I am also disappointed in myself for not having done this 3 years ago when I could have and should have. This is the very reason I went home in March, why I cut the volume and focused on speed and mental strength, why I re adopted my freakish ways in nutrition and stepped outside the norm in social patterns.

I have looked at myself in the mirror and have looked away in shame. I have gone to the drawing board with my coach, leaned on family and friends that I know are there for me, and have gathered the balls to correct my mistakes by accepting what works for me and DOING IT.

Vineman for me was a check mark- I've finally done what I knew I could. Not exactly too late, but really pushing the cusp. Regardless, you give yourself a pat on the back for getting your sh*t together, and piecing a good race, and move on.

There's no need to swim in a river of glory from one result. For me this result is only a stepping stone for the level that I want and know I can compete at. It's the insatiable need for bigger greatness and higher victory that makes champions.

Now it's rest, recover, take all that Vineman gave me as part of my prep and get ready to PR in Kona by so much that it will seem unbelievable. But to me it will be a slightly tardy beginning into exactly what I came to do in this sport.
Posted by TATI at 8:11 PM