Life sometimes takes 180's and it did so for me yesterday.

I woke up at 5, had a solid breakfast (to avoid airport food- first because it sucks and second because even water is priced as if it were Holy water). Then I drove to Julie's house so I could park my car there for the week as she was nice enough to take me to the airport before her morning swim.

So I get to the airpot at 6:30ish and my flight was scheduled for 8. There wasn't much of a line for United, I had all my papers, & all my lugagge...I was ready to fly to camp!

ONE EIGHTY!!!!!!!! Boom, just like that- get to the ticket counter, lady asks for my passport and visa, I show her my new passport, my H-1B worker's visa approval, etc and she says "where's your Canadian visa?". Uhhm, come again? Since when do I need a Canadian visa? I distinctly remember traveling to Vancouver in 2008 for Worlds and simply showing my TX license and Mexican passport with only a student visa for the US, not Canada.

Well, it turns out that a new rule came out in late 2009 sort of primarily aimed at Mexico for our fabulous drug shenanigans, that unless you're a permanent resident of the US or have a valid Green Card (which you can get after x # of years on an H-1B), you have to have applied and received a Canadian visa at your local Candian Consulate.

"Sorry ma'am, without it you can't travel". I call my attorney to verify and yes, it's true...I, we, was/were so concerned with having all set for my way back IN to the US that the new rule escaped the radar.

Anyway, there I was bags all packed, ready to go, sitting curbside waiting for Julie to come pick my sorry a** back up after her swim. I called my homestay in Canada, and she was really nice and understanding, and encouraged me to go to the Canadian Consulate and still try to make the camp. I smiled, but realistically, it was over. By the time I land an appt at the LOS ANGELES Canadian Consulate (if they even have an appt available for the next couple of days), apply, and receive the visa, camp will be ending or over.

However, as I sat outside the aiport, I tried to brush this ordeal off my shoulders, realizing that I'm not "stuck" somewhere horrible and losing a trip to freedom, safety. Or, on the less extreme, I'm not in a shabby training location like the Midwest. I'm in beautiful San Diego- THE mecca of triathlon, and if I have to miss out on meeting my coach, some testing and hard workouts with great athletes, so what? I can continue to work hard and train my butt off here with the incredible athletes that fill this city as well. There will be plenty of other camps, and everything- EVERYTHING- happens for a reason.

So, I proceeded to sign up for the San Dieguito Half Marathon this weekend, and planned to ride the 80 for Haiti cycling event, today (Saturday). They closed the registration for the bike ride, but as long as I don't use their aid stations or eat their post race food, then I won't feel in the wrong for riding bandit :) Heck, I'll even take my check book to make a small donation.

Well, back to the hectic day...I made it hectic because I was sort of on an adrenaline high from the sudden change of plans, that I decided to hit noon swim and ride as soon as I got home. Julie had to make a quick stop at KP's for some ART, so I ended up home at around 11:15. In literally 10min I assembled my bike, unpacked a swimsuit, cap, and goggles, and headed to 11:45 masters. It turned out to be a good swim, I even moved up a lane :D Then it was pit stop for a clif bar and meeting Caroline for a 2hr hilly-ish, but ez/steady, ride. Some gym & core later, and finally I sat down for a meal at dinner time and was in bed at 7pm. What a day!

Now, I'm off to Julie's again in a bit, only this time it's to drive east for the start of the 80mile ride!

Moral of the story- make lemonade people!!!
Posted by TATI at 6:28 AM

Don't really have much time to blog today as I leave for camp in Victoria tomorrow :D!! But I just wanted to give a little update and tell ya to stay tuned for lots of pictures and tales of my time in Canada.

This week I started to see a major increase in fitness. I'm loving the training plan, and it's comforting to know coach Paul is steering me in the right direction. Gotta trust the plan for it to work- first and foremost!

One of my favorite workouts ever was yesterday's 20x400s. After my 3hr hard ride in the morning...which was supposed to be Swami's but I got inpatient, left too early from home, and then never got caught by the group, so ended up just hammering on my own...I went into intense sleep for almost 2hrs and woke up eager to get my run on.

I had intended to do them at the pretty La Costa Canyon H.S track but got there and there were a bunch of kids and supposedly a game starting later. So I veered over to the local middle school dirt track and it turned out fabulous. There's just something about that old school dirt/rugged track that inspires me when I run there. The time flew by, and after the set, I just cooled down around the neighborhood.

I'm fired up to get in a beast amount of quality work with the LifeSport peeps :)
Posted by TATI at 12:26 PM

The past couple of days I've been trying to pin point my races for the year with greater accuracy. I thought I had it down until last night when the Xterra Running RD sent out an email saying Mission Gorge 15k was to be rescheduled in lieu of the upcoming rain for March 7th. Great!

March 7th was first going to be Desert Int'l- that sold out, so I replaced it with Gran Frondo Century ride, and as much as I was looking forward to MG, I'm not missing out on Gran Fondo this year! After all, it ends in the Little Italy 'hood of San Diego- what more could a hungry 100-miler possibly ask for?

Tawnee and Lauren will be doing the same (Sara might be out of town), and the following wknd- March 14, is Black Mtn 15k Xterra run, so we at least get to do one trail race :)

Oh, and yesterday as I was waiting for Caroline to join me for our morning track session at UCSD, I registered for Super Frog Half April 11th. That'll be really cool because the age groups are bracketted larger than normal, 18-29 in my case, and there's also an amateur prize purse! I could really use some extra cash...like yesterday!

About our little track workout. Well, it was one of those that look rather easy on paper but then by the time we had warmed up, the butterflies started setting in- excitement and slight anxiety that this would actually be quite painful. Ahh pain is good though!! :D

So main set was 8x1mi not all out, but goal half mary pace. Cool. We planned to descend from 6:40 to 6:20, having 2min RI between each. Thanfully, Caroline had done this workout with Katya and they discovered a set point in the track where you can do an 800 then run road (flatish) to a stop sign for 1mi. Another point on the track you basically leave from and run some road/most trail for another mile. So we varied it and only had the last one as ALL track. That was tooons better than going around like nervous hamsters for over an hour. 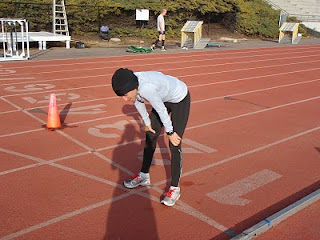 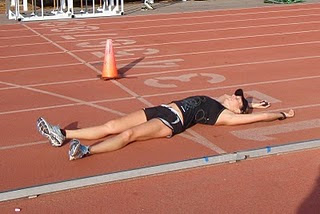 It could not have gone better, granted we were hurtin', and the last two well both of us had voices screaming inside our heads to STOPPP. But, that's what training partners are for..off we were for the last two. From 6:38 on the first, right down to 6:15 on the last :D Yeah baby!

To refuel before noon swim, which ended up being quite a solid session as well, ironically (I thought I'd flat out sink to the bottom!) I headed to Ki's for some good 'eatin 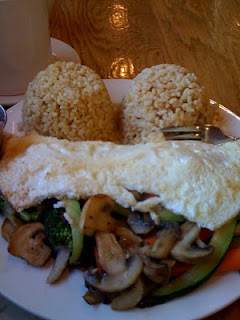 An update on a new personal sponsor for this year- I say personal, because our Team has decided to leave certain partnerships like shops and running shoes to individual preference because a shop is usually something local to you and things like a running shoe brand are difficult to please each one of us- having unique running biomechanics, etc.
After incredible support from Edge Cyclesports which started, and continued, as a great friendship when I was living in Orange County, I am happy to be racing for Nytro from now own.
Nytro was the first shop I ever purchased something triathlon-related from. I kid you not, I made my order from Dallas, TX my first year racing in 2006 upon recommendation from a friend. Anyway, now that I'm settled in Encinitas, it makes perfect sense- they are indeed my "local shop".

Before I sign off, on the team front, RAHA Women's Triathlon Team is thrilled to be associated with the RAHA Pro Cycling Team & the Bahati Foundation. If you haven't already checked out this video do so! The power we have as athletes to improve the future of younger generations is massive. www.youtube.com/watch?v=53xa5DHwvG4
Posted by TATI at 10:59 AM